A purgatorial plane of battle, of life and death unending. A warrior’s heaven turned hell.

This place is unmoored from the rest of creation, a prison and testing ground, a cyclic reincarnation. Here there are no bystanders, no hapless civilians, only those who took up spell or blade or bloody maw in their first lives and woke up cursed in this one.

The eternal hex is a cosmic wargame waged by peoples from every conceivable moment in the multiverse, their souls pulled in upon death after they had taken the life of another. To ascend and escape, the cursed folk must band together beneath a gifted captain who can take the six eternal fortresses and a fruit from each of the sacred trees, then perform the ritual of final fire at the heart of the hex.

Then that captain and those who have shed blood for them are freed to continue their soul’s journey elsewhere as the eternal hex burns clean and reforms once more. 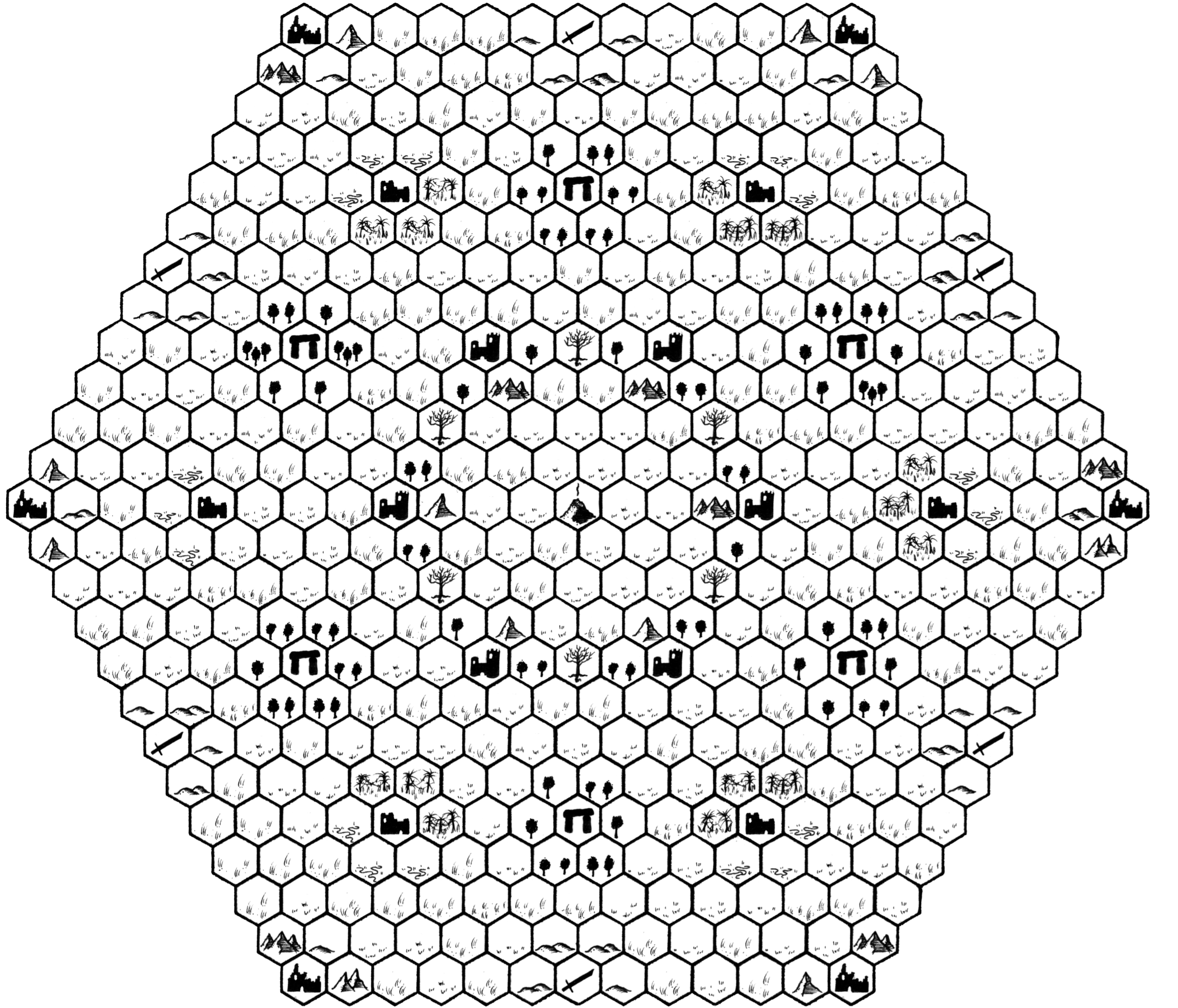 Prototype map of the Eternal Hex with only major landmarks/known geography laid down. Definitely work left to do to fill out all the grassland with various features and geography. Plus, the whole thing will need to change to a commercially supported tileset instead of the default for Hex Kit.

In each corner of the ruinous hex lies a dilapidated castle on a great plateau given to a promising captain with their retainers from Before. Each is flanked by the void and by mountains sheer. Before the castle, hills down to the wider hex.

Along each edge in a valley nestled between steep hills are camps of warrior spirits who volunteered to come back and live, fight, and die forever in this strange hell.

Further in, a ring of half-ruined forts kept by failed commanders of the last cycle, surrounded by marsh and jungle. Between them, monuments to dead gods, tended by priests who refuse to let their last spark die, hidden within towering and hostile forests.

Finally, before the Burning Mountain, the battlegardens, fields where eldritch flora and fauna spawn beside the bones and rivers of blood from all the battles in creation.

Players start as one of the six captains gifted a dilapidated castles at the edge of the eternal hex with their sworn warriors from a past life (24 points). The reincarnated folk of the mountains and hills adjacent to their castle are loyal enough, for now.

Every hex outside of the battlegardens contains reincarnated spirits or beings unaligned to the Captains and must be brought into the fold or disposed of. Several hexes are under the control of more powerful factions: the Volunteers, the Failed Captains, the Worshippers of Dead Gods, the Keepers of the Eternal Fortresses, or the Guardians of the Sacred Trees. Each of these can be conquered or, if their conditions are met, swayed.

Reinforcements may arrive, but slowly: if a group is wiped out, they can be resurrected after one year. If they’re merely depleted, the survivors may use their bonds to resurrect them the following season.

As Companies pass their time in the Eternal Hex, they may grow more eldritch and powerful.

Time in the Eternal Hex #

Time passes here as anywhere else, albeit strangely. There are three seasons here: Sowing, Growing, Reaping, and Resting. Each consists of two weeks before the cycle renews again as another year.

Play breaks down by weeks: each Captain decides how their forces spend that week and any skirmishes between forces must be resolved before the next week’s orders can be given.

To win, one Captain must lead their coalition to take all six eternal fortresses and the fruit from each sacred tree, then make it across the battlegarden to the Burning Mountain to perform the ritual. When the ritual is completed, the world burns clean and is reborn and those who chose poorly are returned to live and die again, remembering only the agony and failure of their last cycle.

I’ve been noodling on the Eternal Hex as a structure for narrative wargame campaigns/organized play. A combination of turn-based strategy game where the players decide how to marshal their resources and deploy their forces mashed up with the skirmish wargaming of Flagrant Factions.

I think there’s probably two ways to do a project like this:

I don’t see these as mutually exclusive options, though I think the latter depends on the former (and will take longer, since it requires additional digital tooling).